USS HUGH PURVIS (DD709)
REUNION ASSOCIATION (HPRA)
Haze Gray and Underway! Welcome Aboard! The web site for all shipmates of the USS HUGH PURVIS - DD709, from commissioning to its transfer to Turkey in 1972. Come aboard and have a look around. If you like what you see, let other shipmates know what they are missing.
(Updated - 4 JUNE 2020 "Useful Links") 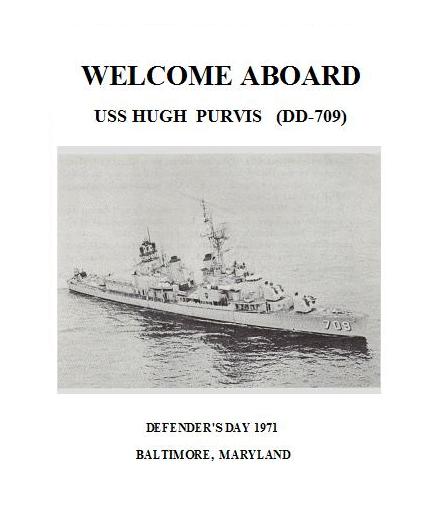 See the following for information on...

MEMBERSHIP INFORMATION    (Use "link" to update your information)

Remember, the HPRA, this Website, the Shipmate Directory and the Newsletters are not possible without your financial support.

An electronic copy (PDF) of the Shipmate Directory is available to all
"ACTIVE" members via email from the HPRA president (email Link).

HPRA NEWSLETTERS   The next Newsletter is scheduled for JULY - 2020

"NOTES, NOTICES, HEADLINES & MORE"
(An "Underlined" item is usually a link to an article or website)

WARNING: If you are using FIREFOX Version 78.0.1. Images in the "Galleries" and some in "Slideshows and Albums" may not work properly. They are showing a blank image or a "Broken Thumbnail" instead. This is a Windows Firefox problem in what they allow with some forms of secutity. Firefox works properly on Apple IOS (iPad, iPhone etc.). PC version 78.0 should work.

There is a temporary fix for this but a bit technical. If you want it, use the contact item near the bottom of this page to request it. For now, I suggest using Google Chrome or MS Edge.

The next HPRA Reunion will be June 9-12, 2021 in Milwaukee, WI
Preliminary information will be in the July 20200 newsletter and is on the "2021 Reunion..." page. See reunion link in left hand column.
A VERY SPECIAL VIDEO - OMAHA BEACH
(provided by David Lee)

This video deals with the The US Cemetary in Normandy France and Omaha Beach where the troops landed on June 6, 1944, during World War II. It presents a father and his young son and their visit there. It is a bit late, but still worth viewing.


The following slideshow presents group photos from HPRA reunions - 2006 through the most recent. The show was created using "Microsoft Sway" (see note on Sway at the right-bottom). If you have any previous to 2006, send them in. Use the "Contact..." link at the bottom of the page. 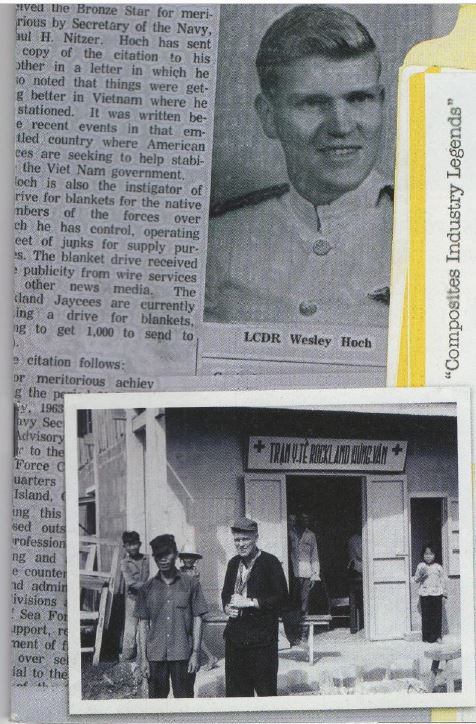 A previous article on Wesley Hoch was presented by JJ Larson (59-62/Lt) and is located on the "Sea and Short Stories" page. The original article was in two-part with only part-two available. The full two-part article, in "Composites Fabrication" magazine, provided by a shipmate, is now available. Part-one deals with Hoch's life later in Rockland Maine with part-two covering his work during the Vietnam era.
The "PDF" version that includes both part-one and two is now available (select photo) or via the "Sea and Short Stories" page replacing the original.


"Unless you’re a student of history, you probably are unaware of a major battle that occurred in Korea on June 10-11, 1871.  Yes, the United States fought Korea before the 1950’s. And 15 members of the force that fought there received the Medal of Honor for their part in the Battle of Ganghwa." A short story of "Capture the Flag." Read the full story here...

UPDATED - Be aware of the many  scam attempts, especially those dealing with the Coronavirus Pandemic (Covid-19).  These seem to deal mostly with  fake and dangerous cures. Your own doctors are the only ones you need. Reports indicate the scammers are targeting veterans at an increased rate since the Covid-19 outbreak.

A very recent scam deals with the Federal stimulus checks from the IRS. Don't fall for any showing up in the mail that are not directly from the IRS. These fake checks are attempts to get your banking information.


Here are some of the most common ones active today...

These examples will all try to convince you that something is wrong, They all try to get you to reveal personal information about accounts or your computer access. Some may require an "up front" fee to help fix your problems. Do not fall for any of this.

If any really need to contact you is will be via regular mail, often registered mail. If any ask for you to verify account numbers, hang up. If it's through EMAIL, delete it - do not click on any links within a message. A real institution will already have your personal information and will not ask you to verify it by having you actually say it or email it.

From "USVCP", the VA and other sources, Each open in their own window or tab. Let us know if any stop working.

(From time-to-time, something special will appear here. Maybe a photo or poem etc.
After a period of time, the item will move to an appropriate page.
(Always In progress - Stay Tuned)

(From a Facebook posting by Scott Edwards - Original author unknown)


I was teaching a night class at a local college when a question came from a few rows back:  “You said you were in the navy. What did you like about that?” It was a three-hour class and we were about at the break, so I said to them “If you want to stick around I’ll tell you. If not, come back in twenty minutes.”

I told them this:

I liked it when we were at sea and the deck of the ship dipped close to the swell, and the rocking let you sleep like an infant, no matter who you had wronged.

I liked it when, on moonlit nights, the flying fish would erupt from the waves, their wings like hammered silver, so many that their bodies littered the deck at dawn.

The taste of salt spray on the tongue when the bow cut through a jade-green sea; the boatswain’s pipe ringing down the passageways; the order for sweepers; the wash of a swab on a deck; the flash of color when the signals hauled up the halyards.

I liked going to GQ, feeling that we were ready to fight anything: hundred of boots hitting the deck, running up and sliding down ladders, pulling on headphones, the whole ship flexing its muscles, and me, writing backward in the dark tracking missiles on a sheet of glass.

I liked the voice of a five-inch gun, its fantastic crash just after the warning of a silly little buzzer, the two sounds as different as could be. I liked the clang of the shell casings on the deck, and the acrid smell of burnt powder.

I liked leaving port—putting the whole world behind except that steel box of my brothers, those people who shared every peril and a common fate. I liked coming home; not just to some other place but to the pier and town where we started, because being there meant we fulfilled our promise.

I liked being a little bit drunk, enough to make an evening ten thousand miles from home seem nearly good enough. I liked being really drunk when it took that to make me forget that it wasn’t Christmas in Japan, or Hong Kong, or that I hadn’t seen my girl in almost a year.

I liked that they called me ‘Mack’ because my last name was too hard.

I liked to put on dress blues for watch, even at midnight or four in the morning. I liked shining my shoes until they glowed.

I passed liking into love when our ship slipped into Cook Inlet, passing mountains like heaps of snow-capped coal, the ship swarmed by terns and gulls— all like the mountains, in stark black and white. I felt the same about going beneath the Golden Gate, and into Pearl Harbor.

I liked the long hours, the hard work, the ‘tough-shit’ atmosphere—because I knew that I was pulling my weight, and that made me feel good about myself.

I more than liked the Chiefs, old men at thirty, who seemed to know everything on earth; quiet men who could make a whole division sprint with two words, and to whom everyone, including the officers, deferred as if they were gods on earth.

I liked it when my time was done, but I was wrong to think I could leave it. All those things and a thousand more return in dreams, at stop lights, in flashes of recognition when I smell the ocean. A good part of me will always be there, on those ships, with those men, living by bells in four-hour watches, alive in a very different world.

Return to top of page